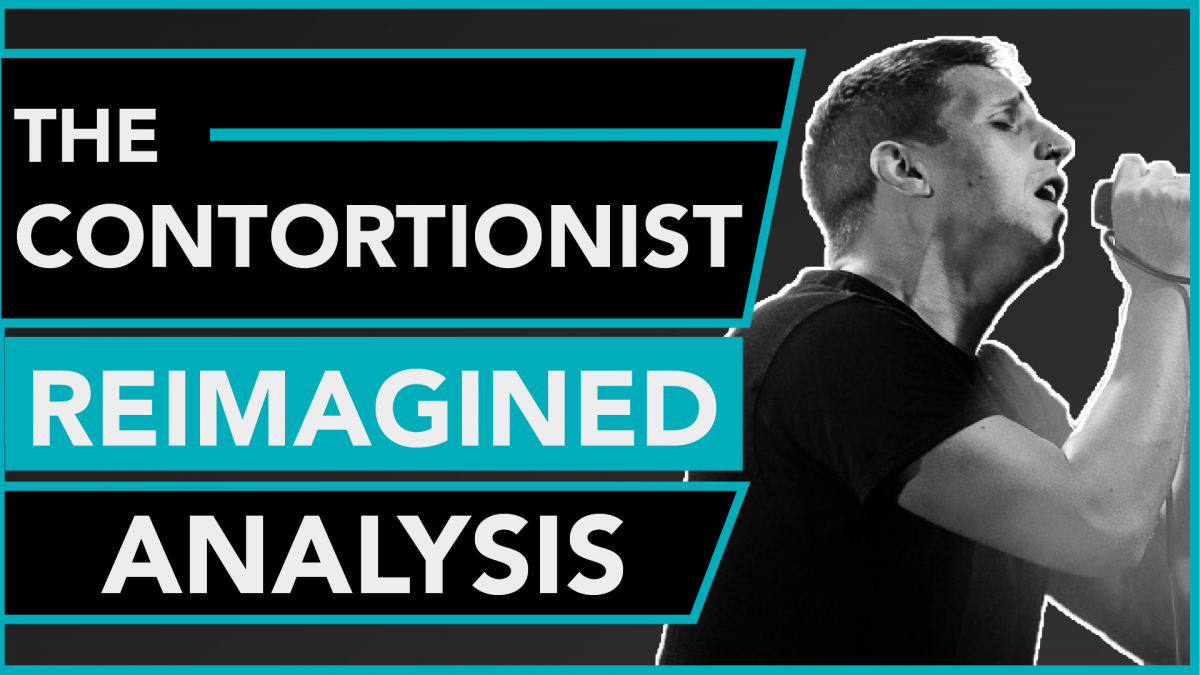 Let’s take a look at The Contortionist’s “Reimagined” and how this song is written to see what makes it such a strong single on their album “Clairvoyant”.

For reference, Deathcore is a mix of Death Metal and Hardcore and has elements such as blast beats, heavily downtuned guitars, low growls and high pitched screams. On the other hand, progressive metal tends to make use of odd time signatures, polyrhythms, and complex chords and harmonies.

The early sound of The Contortionist comes from this mix of heavy Deathcore elements with the technical complexities of Progressive Metal.

Another strong element of their sound is their clean vocals, which at first were done by Jonathan Carpenter, who left the band in March 2013 after their EPs titled “ExoPlanet” and “Intrinsic”. Jonathan Carpenter was then replaced by Micheal Lessard, from Last Chance to Reason, who initially was filling in for a few tour dates, but then became their official vocalist in June 2013.

So while The Contortionist’s earlier albums were focused on a heavier sound, their sound changed a bit for their Clairvoyant album which was released in 2017 and focused more on songwriting, harmony and ambient soundscapes. The vocals also were more laid back and clean compared to previous albums.

Reimagined was released as a single in 2017 and this plays a big role in the songwriting. Because it is a single, the instruments focus a lot on supporting the vocals rather than showcasing their instrumental ability.

Something I found interesting about the Chorus is that instead of playing it fully 3 times they only play it twice and on the last repetition of the chord progression they cut out part of the chord progression to create a transition into the Post Chorus. So there’s a tip for you in terms of transitions. Sometimes all you have to do is repeat the same section but cut out a part of it and that can work as the transition into the next section. Make sure that what you cut out doesn’t mess with the pulse of the song or it might sound awkward.

The tempo of Reimagined is 134 bpm’s.

For the meters of the song I want to keep things really simple so I’m going to say that the Verse and Chorus are in 4/4 with the first Chorus having an extra measure of ¾ at the end. The PreBridge is 12/8, and the Bridge is in ⅞.

This song is full of polyrhythms, so even though it sounds like a simple pop song it is actually really complex. Since we are covering a lot of stuff, I don’t want to go down the polyrhythm rabbit hole for the sake of keeping this analysis as short as possible. But there are plenty of videos on Youtube where you can learn more about polyrhythms if you’d like.

So why does The Contortionist use polyrhythms that sound simple but are actually complex? Why make their life harder? In this album they really wanted to be more subtle with the technicality of the songwriting. They want the average listener to be able to relate and enjoy it, but still have the deeper technical layers for the people who have more knowledge of music theory. So this is a way to make songs that sound simple at first glance but are actually complex if you look closer.

The drums in the Verse and the Chorus of the song stay focused with a kick on the 1 and a snare on the 3. The drums are not very busy to give the spotlight to the vocals and provide a solid foundation.

The Prebridge also has a very tasteful bass melody which keeps you tethered to the song so your attention doesn’t just float away completely. If this bass melody was not there, the tension would be way too loose and likely sound too empty and underdeveloped. So note how powerful small details like that can be. This is an example of when songwriting and production become the same thing.

On the Bridge, they change to a somewhat tribal ⅞ where they accent the 1, the 3 and the upbeat between the 6 and 7 beats. You can tell by listening to the high notes the guitars are playing. This gives the Bridge a more forward movement and builds a bit of tension. Since they play the Chorus after the Bridge and the Chorus also emphasizes the 1 and 3, it helps them transition in a seamless way.

The chord progression is all in Emin except for the last chord in the Bridge which they are borrowing from the E Harmonic Minor scale. In metal, it is common when using a minor tonality to see notes and chords from other types of minor scales to spice things up.

When I found the point of life

It came creeping towards me

In the shape of eyes

It was what you wanted to be

When I saw the shape of sound

It was what you wanted to be

Once you found the breath you’d lost

Once you found the breath you’d lost

And I am exactly what you imagined me to be

The lyrical content reminds me a bit of how Chino from Deftones writes lyrics, in the sense that they are very visually descriptive.

The lyrics support what the instruments are doing throughout the song. We can see that in the Choruses, where the first line says “It was all this reimagined”, which forces you to imagine something large and expansive, making the chorus feel even bigger. The instruments are open and impactful compared to the Verses.

The Bridge also has the vocals and instruments working together. As the guitars and drums are a bit busier and build tension, the vocals are singing about losing your breath, building more tension in the mind of the listener.

The dynamics of this song follow a pop production style, with Choruses being the high points in both dynamics and pitch and Verses being the lower points. Also the song is quite short and each section leads you to the next rather than linger and develop any one section for too long.

Let’s see what key points we can apply from this song to our own songwriting.

The Contortionist is a great example of a band that tests their boundaries, not only in their technical prowess but also in their songwriting and their conceptual way of expressing music.

Reimagined draws inspiration from many different sources such as pop production, progressive rock, and ambient music, and is what makes the sound of The Contortionist so unique and has allowed them to expand beyond a purely metal sound.