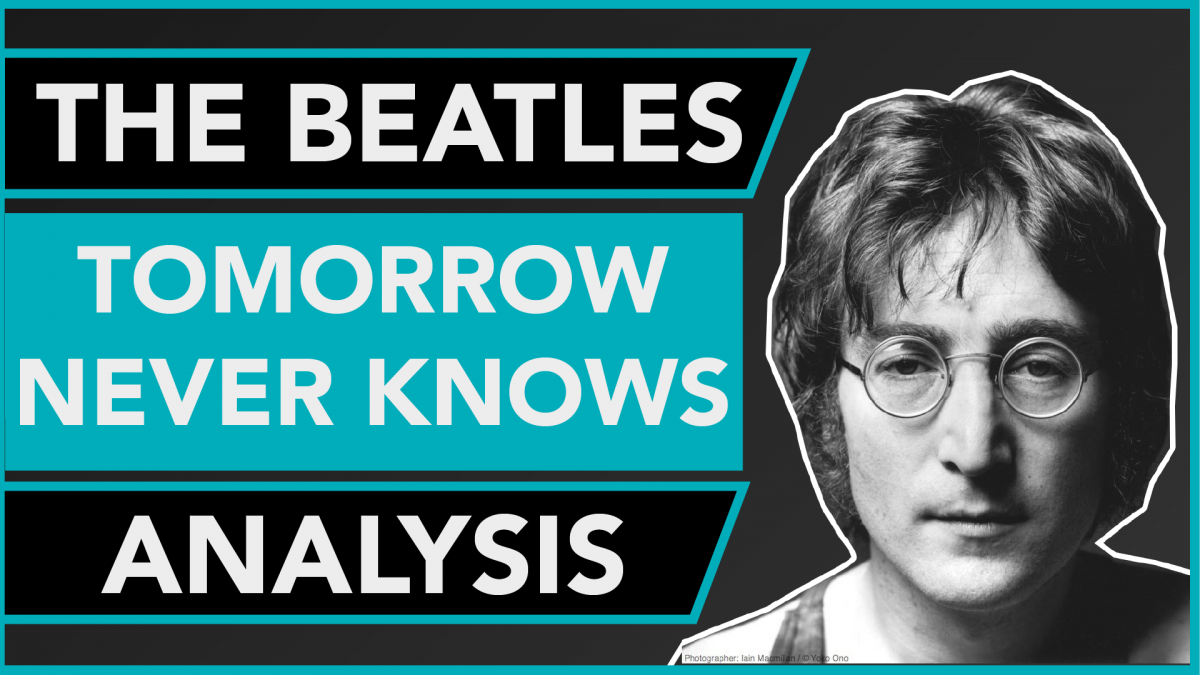 Today we’re going to take a look at how John Lennon wrote a song with no chorus, one chord, and bass and drums that stay the same the entire song, and how he kept it interesting.

Tomorrow Never Knows is the final track on The Beatles Revolver album, released in 1966. This puts it right at the heyday of the hippie/psychedelic revolution, which played a great influence in the band’s sound at this time. Also, about a year earlier, George Harrison was getting deep into Indian music and philosophy, and was able to meet Ravi Shankar (a classical Indian music legend) through David Crosby from The Byrds. This sparked a great interest in George Harrison for the Sitar which is commonly used in classical Indian music.

A mix of the hippie/psychedelic era and this introduction to Indian music led The Beatles to not only experiment with psychedelics but it also introduced them to the sounds and culture of India.

Tomorrow Never Knows puts all of these sounds together with Western rock/pop music that was popular in the ‘60s. They mixed elements such as a one chord droning sitar (common in Indian music), indian instruments, audio samples altered in the studio (for psychedelic effect), and an upbeat rhythm that never changes alongside John Lennon’s pop vocals (as opposed to having had traditional Indian percussion and singing).

This song was never meant to be played in a live setting and that allowed for a lot of experimentation with production in the studio. The methods they used paved the way for how many pop artists write music today, where they often use studio altered samples and sound effects that could not have been reproduced live in the ‘60s but we can today thanks to more advanced technology.

The structure for this song is incredibly simple, There is an Intro, verse, bridge and verse.

Notice how there is no chorus in this song. What they did instead was have a few repetitive vocal phrases which help the listener have something to hold on to. This is quite a step away from standard songwriting coming from a band that was considered pop at the time.

The reason there is no chorus is due to the influence of Indian music which commonly uses droning and does not often make multiple chord changes, as we are used to hearing in pop music today.

I also feel like this song was meant to be an audio snapshot more than a full song. What I mean is that the song is a quick snapshot of a particular song/sound idea, given that it does not develop much further than when it starts.

The song pretty much just rides out the same thing the entire time and uses lots of sound textures and effects to keep the song interesting. Due to these elements I also consider this song to be extremely visual. If you close your eyes and listen you can almost see all the song’s colors and textures. Many people say this song is a good audio representation of an LSD trip.

The rhythm for this song is also incredibly simple. It is literally the same thing the entire song, which is pretty amazing because it doesn’t really get boring. Aside from textures and sound effects, I think the reason the song does not get boring is because it is so short, as it spans only about 3 mins.

As you can see the kick is on the 1 and the snare is on the 2. This gives a very forward feeling. There’s also a crash that is being played all the time and it is meant to create a wash that adds to the overall textures of the song. I think it gives the song a rather bright quality that sounds great. The end of the beat has a slight pause right before returning to the 1 that gives a feeling of stopped motion, which I think sounds super cool.

Other than that the beat is the same the entire time and makes a great groove when played along with the bass line, which also loops along with the beat. The drums are also accompanied by a traditional percussive indian instrument called a Tambura.

The chord progression of this song is just as simple as everything else, in fact, it is technically a one chord song.

The chord is C Major. There are also other notes layered on top on some parts, using synth pads swells, that form a Bb Major over C, but even then there is still a droning C Major chord at all times. This is one of the elements that comes from the influence of Indian music, which feature one chord droning with layers of other sounds.

The addition of the Bb Major tells us that this song is in C Mixolydian because Bb is the b7 of the C Major scale and there are no other sharps or flats.

The vocal melody is also in C Mixolydian. This mode of the major scale is commonly used in rock and is characterized by having a psychedelic sound to it, which makes it perfect for what they were going for with Tomorrow Never Knows.

The song’s lyrics are concept-driven, repetitive, and based on John Lennon’s experiences and book references from The Psychedelic Experience by Timothy Leary, Richard Alpert and Ralph Metzner

John Lennon took a line from the introduction of this The Psychedelic Experience and made it the first line in the song. The line is “Turn off your mind, relax and float down stream”.

For some quick background, The Psychedelic Experience was a book dedicated to Aldous Huxley who was a great author and an early proponent of psychedelics. The Psychedelic Experience is meant to be a guide through the process of ego death which people often experience when using psychedelics. Ego death is a loss of subjective perception. In other words, you perceive things without a boundary of a separate idea of “you” or your idea of who your “self” is.

The book The Psychedelic Experience follows the principles of The Tibetan Book of the Dead, which is a Tibetan Buddhist text meant to guide people through the process of death and rebirth into another form.

This should give you a hint of why this song is written as a loop. The songwriting is meant to support the concept it talks about. This song is made from one chord, one rhythm, one bassline. It is one big song section, which supports the concept of perception without a separate individual experience, or in songwriting terms, listening to a song with no separate pieces.

Given its droning harmony, its repetitive rhythm, and that technically there is no chorus, the dynamics of this song stay consistent all the way through. There are no clear peaks and valleys. A song like this would normally risk sounding boring and repetitive. However The Beatles made it interesting using a catchy rhythm, very psychedelic textures and John Lennon’s voice and repeating lyrics, which leads the listener through the entire song.

Finally let’s take a look at what you can learn from this song for your own songwriting.

Remember that these tips are not meant for you to copy the song, but instead to show you how this song was built, how certain obstacles were overcome, and how to use the general principles for you to write your own songs.

Although this song is very simple, it is still interesting to look at for songwriting because writing a song that is so simple, and so against what people are used to hearing in pop, is quite a challenge.

So you gotta give credit for how creative it is to write a song with no chorus, one chord, one bass line and one drum beat. This is the golden nugget for you in this simple, short song. It is really really creative.

So take that in and challenge some of your assumptions about writing songs, and then write something that goes totally against those assumptions. If anything, it will help you get out of a traditional songwriting mindset and make something fresh. And you can take this song as a template for you to see how to overcome obstacles in writing something really different.