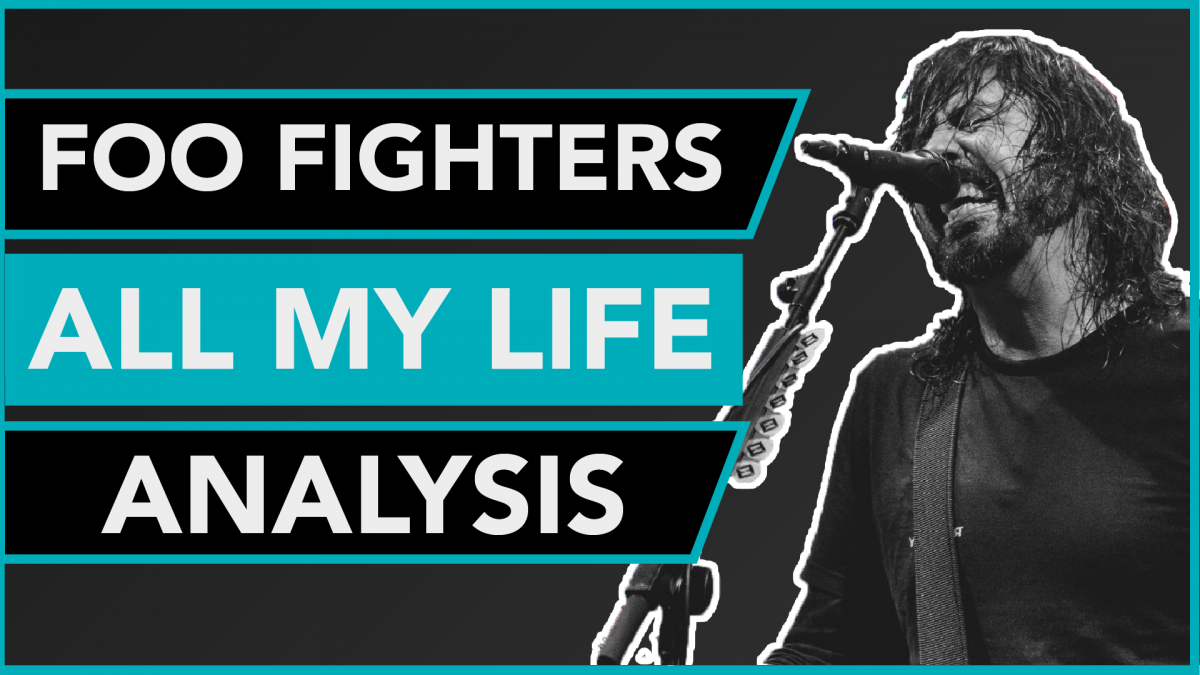 Hey whatsup, this is German with Audiospring Music and today we are diving into “All My Life” by Foo Fighters, a song made from only 3 ideas.

Before we get into analyzing the songwriting of “All My Life” by Foo Fighters, let’s get some background on the band to see where they got their sound.

Foo Fighters is a rock band from Seattle which formed in 1995. It was formed and is fronted by Dave Grohl. Dave Grohl played drums with Nirvana from 1990 to 1994 until Nirvana ended, following the tragic suicide of Kurt Cobain. After several months of grieving, Dave Grohl went back into the studio to record a few songs he had written, which he states were never used for Nirvana because they didn’t match what they were trying to do at the time. Dave recorded every instrument on these songs and named the project Foo Fighters, a nickname coined by Allied aircraft pilots for UFOs. Under this name he hoped people would assume it was a full band. This self-titled album eventually became the first official Foo Fighters album.

Although Dave received offers for drumming gigs after Nirvana disbanded, including a gig as the drummer for Tom Petty and the Heartbreakers, he decided to decline all of them and fully pursue his own way with Foo Fighters. Shortly after declining Tom Petty’s offer, Dave Grohl began recruiting musicians from other bands to turn his project into a full band.

There is a lot of history and a lot of lineup changes in Foo Fighters over the years but for the purpose of this video, I’m going to move on to focus more on where the band gets their sound. If you want to know more about the history of Foo Fighters there are a lot of interviews available on Youtube and I also recommend the documentary Foo Fighters: Back and Forth (2011). You can find it for free on Youtube as well, I will link it down below.

Looking into the sound of the band, there are a few things that stick out in the Foo Fighters sound:

The entire song is made from 3 ideas: palm mutes, a verse riff and a chorus, everything else is a variation of each idea and that’s it, SIMPLICITY.

This is the structure of the song.

You’ll notice that the verses are done as an open riff, and as a palm muted riff. The intro palm mutes are also used as a prechorus, which is a cool way to bring them back into the song. For the postchoruses they used the open verse riff without palm muting it. The bridge is also the intro palm mutes but presented differently as a variation and it has two parts, one is a buildup and the second is the climax where they stop palm muting and Dave is screaming over it.

Structure-wise I thought it was interesting how the verse riff and the palm mutes were adapted to serve different purposes as different sections of the song. This is a good example of how to use a few ideas in as many different ways as you can, so you don’t have a million different riffs in one song. When you have too many ideas in one song, it can make your song sound disconnected, less catchy, and take away from the emotional impact of your riffs.

I also need to mention how awesome the arrangement and production of this song is.

If you ever wondered why your songs don’t sound like a professionally produced artist even though that artist’s songs are simple, these production and arrangement details are what separates you from them. These are some of the things that a producer does for your music to take it from sounding like a demo to a professional production.

For the meters of the song, you could look at the entire song as a 4/4 the whole time, but there are some interesting accents on a few parts of the song, which spice up the rhythm.

The palm mute sections in the song are in 4/4.

For the verses, the drums are accenting the kicks on the 1 and the 3, while the snare accents the 2 and 4. There are embellishments with ghost notes and other kicks of course, but this is the foundation of the beat.

There’s some interesting accents with the snare on a couple of upbeats before the beat is repeated. You can see those in the graph. Once the beat actually repeats, it sounds to me like the kick on the 1 is omitted which makes the beat sound a bit unstable, and this complements the unstable feeling the song is trying to express. Those upbeats also make the pulse of the song sound like it’s getting bottlenecked, which builds tension.

When they switch to the choruses, they release the tension as the drums open up and mark a more steady and straightforward beat accenting the 1 and 3 on kicks and the 2 and 4 on the snare.

My guess is that the chorus was originally an even 6 bars so that it was shorter than the verses (for contrast), but they added an extra measure to make it 7 so that they could really squeeze as much tension as they could from the choruses and make it less predictable.

This is a good tip for you in your own songwriting. You can add an extra bar here and there if you need to, it doesn’t matter if the number of bars is even or uneven. When done correctly, this can help make your songs sound more interesting and unpredictable, but be mindful with the pulse of the song.

For the bridge of the song, they start off playing the palm mutes but then develop it. The drums begin playing in halftime to create a buildup. The kick accents triplets, while the snare accents the 2 and the 4.

The triplet beats on the kick drum and the hits on the hi-hat build tension, while the snare keeps this section sounding very open and stable, until finally they land on the climax power chord with a steady 4/4 beat accenting a kick in the 1 and 3 and a snare on the 2 and 4.

The song is mostly in Gmin and is made up of mostly riffs and power chords.

Also while the verses and bridge all start with a Gmin, the choruses start on the VI chord of the Gmin scale.

I want to focus on the chords in the chorus for a minute and point out that most likely it started off as simple powerchords and became more developed during production by adding chord extensions.

The Chorus is 5 chords:

So this may look complicated but have in mind that Dave Grohl doesn’t know a lot of music theory so this probably started out as simple power chords and then likely the producer figured out what the chord extensions were to give more life to it. This goes to show you that you can start simple and then develop things with your producer afterwards.

The vocal melody of All My Life is in Gmin.The verses center mostly around the minor 3rd of Gmin (Bb). In the Choruses it centers around the root (G), giving it a very stable feeling that contrasts with the unstable, chaotic feeling of the verses.

The pitch of the vocal melody is lower in the verses and higher in the choruses. The bridge and last verse also have a higher pitch in the vocals to give it more tension.

All my life, I’ve been searching for something
Something never comes, never leads to nothing
Nothing satisfies but I’m getting close
Closer to the prize at the end of the rope

Calm down, don’t you resist
You’ve such a delicate wrist
And if I give it a twist
Something to hold when I lose my grip

Will I find a believer?
Another one who believes
Another one to deceive
Over and over, down on my knees

All my life, I’ve been searching for something
Something never comes, never leads to nothing
Nothing satisfies but I’m getting close
Closer to the prize at the end of the rope

All night long, I dream of the day
When it comes around and it’s taken away
Leaves me with the feeling that I feel the most
Feel it come to life when I see your ghost

As far as lyrics go, what I understand is that the song is about being desperate for fulfillment. After looking through the internet I found that Dave Grohl said it’s about giving oral sex to a woman so I guess he loves it but he hates the taste.

In terms of dynamics, something I thought was interesting was how they introduced that first open verse riff before doing the palm muted version of the verse riff. This was a nice introduction to hearing it as a high energy open riff so that later they could use it as a post-chorus to transition back down to the palm muted verse.

I also liked how they took the bridge dynamic all the way down and slowly built back up to the highest tension of the song. It really gives an epic feeling to the song and makes the last chorus feel super satisfying.

As I mentioned in the structure part of the video, It’s really cool how they used the same ideas and gave them different purposes in the song, like with the palm mutes as prechoruses and the open verse riff used as a postchorus.

Let’s see what key points we can apply from this song to our own songwriting.

All My Life by Foo Fighters has everything from great riffs, an epic bridge and catchy melodies that stick in your head, not to mention great production and arrangement. And Foo Fighters have said it’s one of their favorite songs to play live.

Even though the entire song is made from only 3 ideas, it really squeezes the most out of each one. Hopefully this video helped you see how to get the most out of your own ideas as well.