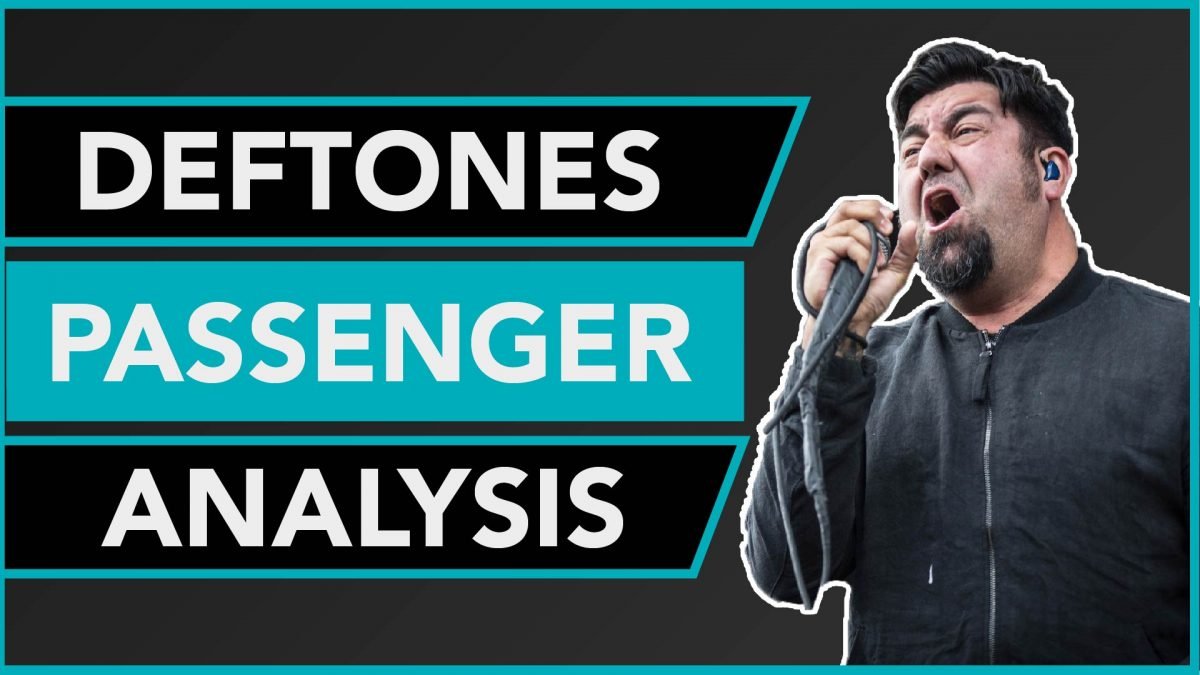 Today we’re going to analyze the song “Passenger” by Deftones. We’re going to break down what they are doing in their songwriting and at the end we’ll go over the tips we can learn for our own music.

Deftones is a metal band widely known from the era of Nu-Metal (which has influences from rap) but I would say their sound extends beyond that label. Without getting too deep into genres they are probably best described as just a really great metal band.

The band consists of 5 members.

Their sound makes heavy use of dramatic musical contrasts between very aggressive metal sections and very soothing, ambient sections. Chino often switches between shrill screaming and intimate, breathy clean singing. Abe’s drums tend to focus on beats and groove rather than very complicated, fast, technical playing and this is due to the influence of rap. Chino has mentioned in interviews that they grew up in what he described as a ghetto and they were constantly surrounded by beats and rap which influenced their sound.

Another big element of Deftones’ sound is the simplicity of their songwriting, which helps to squeeze the most out of their songs while keeping their music short and easily digestible.

A few highlights about this song:

Words that I felt describe this song:

At times this song is speeding forward while others it is as if suspended motionless in mid air.

The image below shows the song structure of this song.

Passenger paints the image of a man driving a car. The “story” focuses on creating an image of a moment rather than telling a story in a traditional sense (with a beginning and an end). The songwriting reflects this as structurally, the song never ends, it just speeds away with the last prechorus that builds up to nowhere. This is a stylistic choice. The listener doesn’t have much background context on what is happening. This is just a moment in time rather than an actual story.The song ends as if the listener was a bystander watching the car speed away on that last prechorus..

Below you will see how this song is structured rhythmically. I took this down to it’s most basic form to make it easier to understand.

I believe the ambient verses are in 4/4. The placement of the kick and the snare make the verse give a feeling like you are suspended motionless in mid air, because sometimes, the drums are accentuating the down beats and sometimes the up beats. The motion doesn’t feel forward or laid back, it honestly sounds kind of random, although it isn’t. This helps support the feeling of floating motionless in mid air. This is a great example of using percussion to support a spacey song section. As you can see here, drums don’t always have to have solid steady beats and can help a song section sound even more ambient.

The chorus and bridge are in 4/4 and emphasizes a forward motion with the kick and snare placement (kick on 1 snare on 3).

If we look at the chord progression we will see how this song is not written as a songwriter would traditionally write a song and how this method is focused more on riffs and colors rather than chord harmony and music theory.

The instrument chords are all in E Phrygian, which is a minor mode. This helps the song feel like a colder, darker version of the minor scale and matches very well with Chino’s ghostly voice.

The chorus riff is in E phrygian. There are not really any chords in this section. Instead it focuses on the riff.

If we listen to the root notes the bass is doing in the verse we could say the verse uses these chords from E Phrygian (Em, Gmaj, Dm, Fmaj).

The prechorus is just one chord and the notes they are playing on the guitar form a Csus2 if we look at the important notes (C as root, D as the 9th).

The bridge is mostly powerchords on E and D#. If we wanted to guess the full chord we could say they are Emin and a D#maj based on their sound. D#maj is not in the scale of E phrygian so to explain this, rather than try to find what scale D#maj is in (because they probably weren’t thinking in terms of chord harmony and music theory), we can instead say that they added the D# just to make the bridge heavier. This is another hint that lets us know that they are not following standard chord progressions like a traditional songwriter but are instead making decisions based on riffs, colors, and stylistic choices.

The vocal melody and guitar in the verse are in E phrygian but in the chorus the guitar is in E Phrygian while the vocals are in E minor.

These two scales have one note that is different which is the F and the F#. The reason they don’t sound bad when they are used together is because they never play the F and the F# at the same exact time and all of the other notes of the two scales are the same.

The play between Chino and Maynard’s vocals is great as well. They manage to balance them out by having Chino focus mainly on verses while Maynard focuses mainly on choruses. They also provide some call back vocals for each other to help them sound more together.

This balance works well because Chino’s voice tends to have a more cold and ghostly tone to it (matching the atmosphere of the verses), while Maynard has a warmer and thicker tone (which is great for the full throttle intensity of the choruses).

Let’s take a look at the lyrics:

The lyrical content focuses on painting an image of what seems to be someone driving fast, hopped up on a drug and receiving oral sex. Chino’s vocals are known for being very visual and painting scenery rather than telling a full story in a traditional sense.

I believe the real objective of this song is actually to make the listener experience a rush. This is supported by the lyrical content as well as the songwriting. Also, Deftones’ music tends to be very sensual in a dark way with its themes and images and I think this is an example of them doing that.

If we look at how the lyrics are divided between Chino and Maynard we can see that they are very well thought out. I would say that Chino’s voice represents the main character in this “scene” while Maynard’s voice represents the drug he took and the resulting alter ego. You can see the contrast as Chino’s vocals sound very spacey and ethereal while Maynard’s vocals are more intense, driven and in-your-face. Though their voices are similar they have a Dr. Jekyll and Mr. Hyde contrast to them.

Tension and release are very important in this song. Overall, there’s a lot of tension at all times. Even when the song is slow and spacey in the verses, the ambience is dark and dissonant making the song feel suspenseful, kind of like a horror movie.

Below you’ll see my interpretation of the dynamics of this song.

The song starts with an anxious pace in the instruments but the vocals are slow and laid back.

When they switch to the verse, the dynamic actually drops to a very ambient, motionless section with virtually no guitar. The vocals also sound very ethereal and spaced out. Although there is a lot of space in this section, that space also feels very empty without the guitars.

The prechorus then brings a lot more movement and tension with a pulsing strumming that quickly raises the dynamics to the chorus of the song, which has the full band and is the most intense part of the song.

After the chorus there is a postchorus which sets the dynamics back down to the second verse with Chino’s vocals, which is very much like the first, but with some additional backing vocals from Maynard. This keeps the energy slightly higher than the first verse.

After the second verse they do a prechorus, a chorus and finally they go to the bridge. The bridge is very simple power chords that help to squeeze out the last bit of intensity from the chorus.

After the bridge they go back to the verse but the vocals only do some very mild call backs so that the listener still has something to hold on to without doing a full melody.

The song ends with a prechorus played twice as long which has the function of raising the tension back up but it never arrives at the chorus. This leaves a feeling that there is no resolution and helps create the image that the car simply drove away from the listener.

In a way it is like the song began telling the story through Chino, then Maynard and at the end, we were on the side of the road watching the car race by.

We’ve made it to the songwritng tips for your songs. Let’s see what you can learn from this song for your own songwriting.

Chino’s lyrics paint very vivid images and often describe things. In passenger both Maynard and Chino not only describe the setting, but set a very specific mood. If you need help with lyrics for your own songs, go beyond expressing something and consider how you can show it by painting images for the listener with your lyrics.

As I mentioned, Passenger is really about the emotional context of the song, the rush. Consider how you can communicate the emotion behind your song to the listener by putting them in a “scene” where they can better visualize and empathize with the emotion you are trying to express.

You know when they say that once you know the rules then you can learn how to break them? This is a great example of that. Just as Deftones used E Phrygian in the chorus while the vocals used the E minor scale, you can do the same.

If you have a rhythm section that is in one tonality/scale you can actually use a different scale on top of it, as long as most of the notes are the same and you don’t play conflicting notes at the same time such as minor seconds (notes that are half step off from each other).

As a songwriter, you are not confined to traditional songwriting templates and standard chord progressions. You can write songs based on riffs, colors (using the modes for example), and stylistic choices such as using chords outside the tonality to give a certain effect (like how Deftones did it with the D#maj in the bridge to sound extra heavy). This is why many people that don’t know music theory are able to write songs by following their ear.

I think the song was named “Passenger” because the main character (the person driving the car) was being driven by something else (in this case, a drug), and he was watching himself as the passenger of his own actions.

The play between Chino and Maynard’s vocals supports this, where Chino is the actual person and Maynard is the drug induced alter ego that was driving him.

I also think it is important to stress how different this way of writing songs is to the traditional methods, like following standard chord progressions and songwriting templates. This is a great method to use and you can also mix the two so you can have more options when you are writing a song.